Audience view recommendations in zoom :
When you enter, your video and audio will be turned OFF, please leave it that way, if you click on the "up arrow" next to your camera icon ((lower left-hand toolbar) your VIDEO SETTINGS can be accessed, click the box "Hide non-video participants". Then the performers only will be visible. Select "Gallery View" in upper right corner of the ZOOM window to see the group.
- In the parameters of zoom turn off automatic volume settings.
- Go to advanced and allow "enable original sound". Now when in a zoom meeting you can enable and disable this feature.
- Also un-activate noise reduction or put it at "low".
https://youtu.be/50NoWIiYECA
Regarding the "effects systems", this 1990 John Cage quotation comes to mind:
"I'm not sure technology changes things that much; it changes them if we are concerned with what the results are. But if we deal with the new technologies as closely as we have dealt with the old ones, then we will come to appearances that aren't superficial. What I hope won't happen is that we are quickly satisfied with technology itself. What is to be hoped for is an interaction of people with technology, rather than a quick acceptance of what technology does. There's so much button pushing now, and the results are so spectacular that there's a temptation, which I hope is avoided, of just taking what the technology gives and not doing anything with it." 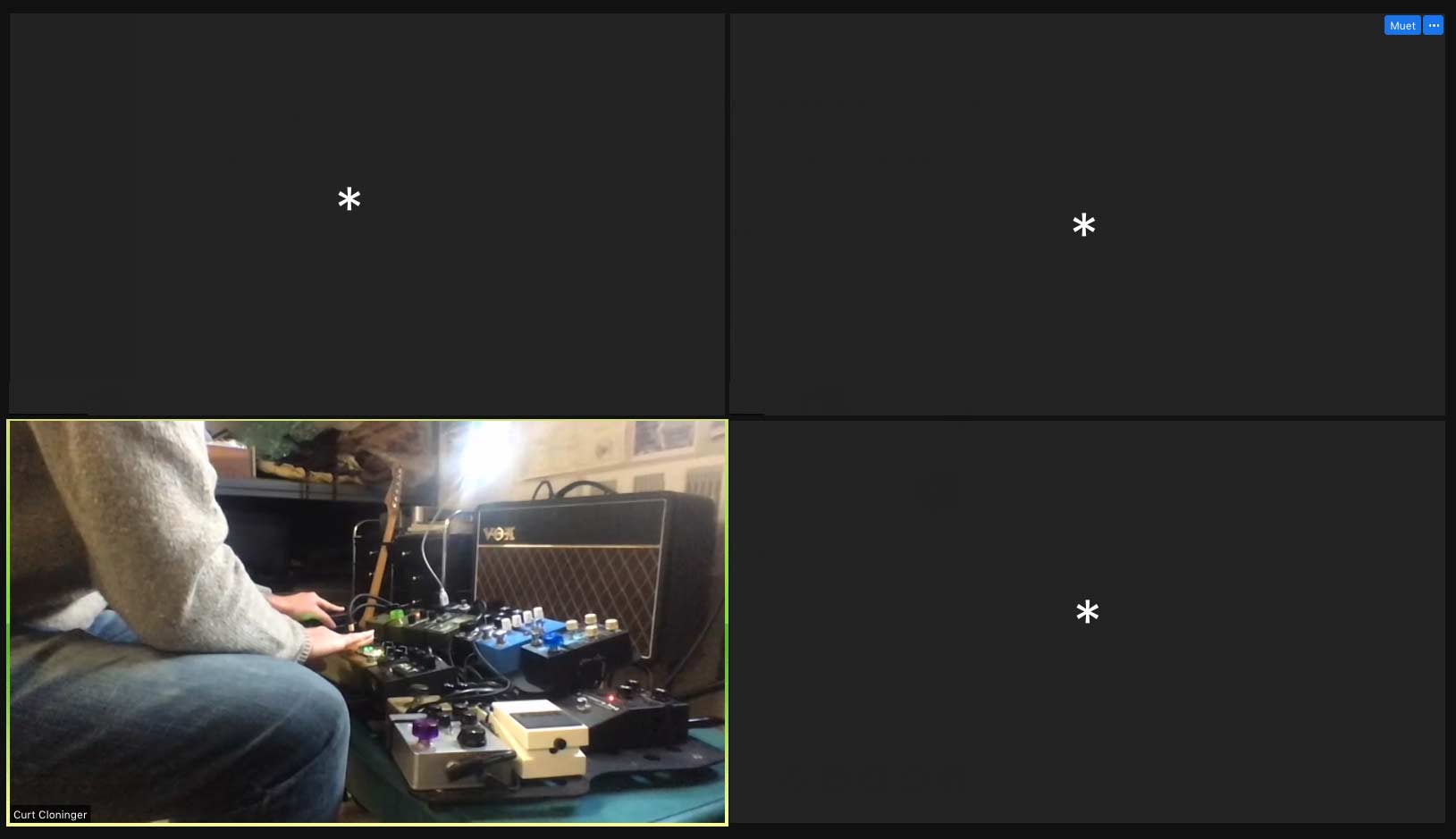 Superimposed video.
For that I (Daniel) will be using LiveLab (a tool developed by CultureHub) and OBS and Zoom.

1_connect on zoom
2_connect on LiveLab ( turn off their videos on zoom and sound off on LiveLab) - I'll connect in LiveLab without video or sound, so I'll be the tech person.
3_with OBS I'll grab the three video feeds and prepare a scene in which the three videos are superimposed with different %'s of opacity and use that as a virtual webcam which then I'll turn on on zoom.

It worked fine! The fakedeepfake of The Entity was born. We can do with more than three!
The overlay creates a phantomatic unity, a “being” that is the result of an intricate active interlaced communicative structure in which both humans and machines are involved in a process of shared auditory exchange and attention. 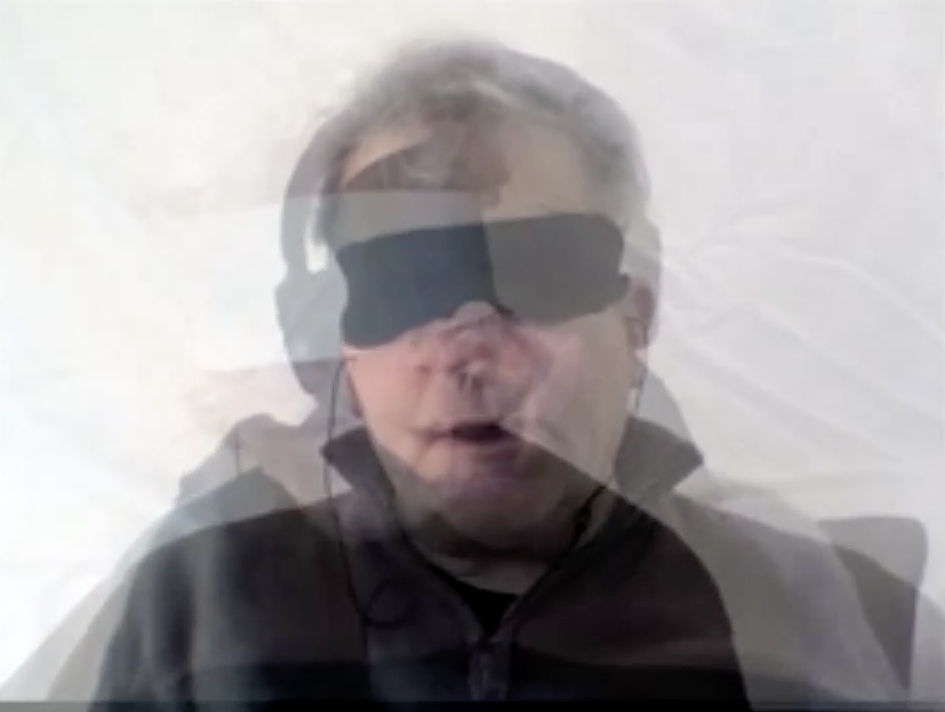 But now that I watched the documentation as if the pedal system were just my voice among many (as Annie said, and as you all heard), I would perform differently (less busy). I think I could set up my system where I had headphones and could hear everyone like a usual performance (instead of only being able to hear everyone through the pedal system). Then that would allow me to perform more as if I were just one voice among many rather than as the single final voice that an audience would hear.

If we approached things as if the pedal system were just one voice among many, then Derek's system and my system could even happen during the same performance. Then it would be an ensemble of 4 human voices + 2 modulating systems. The first of those modulating systems would be modulating 4 human voices + the second modulating system (which itself would be modulating 4 human voices + the first modulating system, etc.), and the second of those modulating systems would be modulating 4 human voices + the first modulating system (whch itself would be modulating... etc.). Modulations of modulations of modulations.
never forget to have original sound on everywhere
Why do we like this mixing so much? ...... still discussing
Annie: Modulations of modulations of modulations. But also, response loops in loops in response loops. I don't know why I am fascinated with this, what makes it so special ... difficult to formulate what this does with the inventing of "new" language, prelanguage language, post, supra, entangled --- resistance, adaption, manipulation, being with, not manipulated, manipulating --- organical
Curt: I like collaborating with aleatoric systems because they remove control from me. If everything is simply up to me, I can get comfortable with my own form of self-directed experimentation. Even collaborating with other humans, the world is so exhausting, if we are being decent and courteous with one another, we tend to head toward a place of comfort and familiarity. But a generative system lacks human empathy. It doesn't care to comfort me or trouble me. It is indifferent toward me. It does what it does. I can use that indifference to my advantage. The art of John Cage's music, it seems to me, was knowing what kinds of aleatory to let in, when to let it in, how much to let in, and what to let it modulate. And then, of course, all of those decisions may themselves be placed under further meta-aleatoric voltage. Here is the current "album" I am working on: https://soundcloud.com/playdamage/ Each song begins with a semi-aleatoric patch on the modular synthesizer system. Then the song evolves from that, and sometimes there is very little of the original patch audio left. It has been a different way of songwriting for me. I don't begin with a verse/chorus "song," or even with a guitar "riff" or a "chord progression" or a vocal "melody line." I begin with an infinitely reconfigurable system.
Annie: I love to watch a fire, to see waves come in on the seeside, pattern and change together, always the same and always different is what makes it so, soothing ... For me aleatoric systems are allmost allways soothing (as I also hear it in Curt's "Sans Cara", although that develops into something a bit more disturbing and then returns to ....) That was not the case in our mix tests, I couldn't distinguish a pattern I could build on, its "chaos" was more like "real" live, a place where humans and machines attack, interfere in, disturb inner stability all the time - the difference being that here nothing could hurt me, our system is safe, and so I can experience a basic aspect of what it is to be "alive" without feeling threathened - my hormones like that
Daniel: I also like aleatoric systems actually but as long as the system doesn't take away our communication or what we develop everytime we come together which so far has been (each time) a moment of exchange through the machines but also with each one of you who is present!
tangential experiments
- mixing
Next: 3rd test session March 20th. Testing layers for 5. Finding the ground - existing with. If possible Curt and Derek mixing both at the same time.
Approaching this test as equals. The mangled mixed "voice", made out of everyone else's prior contributions produced by Curt and Derek will be a 1/6 contribution, not a 5x contribution.

Two tests with Curt's pedal system. We have to carefully adjust soundlevels before starting for this. But we are ready to do a performance with it. Layering is possible but should be done with quit a low resolution in OBS and not on a wifi connexion.